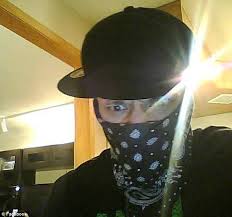 Surveillance footage from a Los Angeles burglary depicts a female suspect taking a break from lookout duty to snap selfies with her phone.

The Los Angeles Police Department released video footage Wednesday from the Aug. 29 burglary in the Bel Air neighborhood, and the video depicts a female suspect snapping selfies outside the home while three male suspects and another female suspect stole cash, electronics and other items from the home.

Police said the group may be responsible for other burglaries in the area.

The suspects left the scene in a white Buick Enclave.