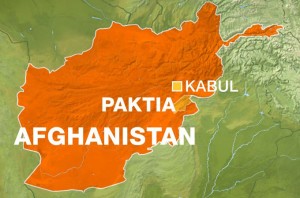 A large group of Taliban suicide bombers today attacked a local government headquarters in Afghanistan’s eastern Paktia province, killing 12 people, as the country’s new president was preparing to be sworn in.

A fighter detonated a explosives laden vehicle at the entrance of a district headquarters in Paktia’s Zurmat district on Monday, leading to a heavy exchange of gunfire between the Taliban and security officials which resulted in three of the other fighters being killed.

At least eight other people, including four police officers, two intelligence staff and two civilians were killed in the attack, police said. The Taliban has claimed responsibility for the attack.

Afghan security officials have faced a resurgent Taliban, with an average of 18 Afghans killed every day this year.

Also on Monday, a suicide attack by the Taliban killed four civilians and injured two others near Kabul’s airport, despite much of the city being under a security lock-down.

And in the northern city of Kunduz, a suicide bomber detonated his explosives in the toilet of an animal market killing himself and injuring two others.