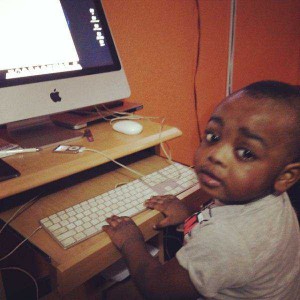 The Akpako master — Terry G, known for his loud music and also his crazy dance steps with his signature bell has started a new trend with his kid.

He has started teaching his son Teerex how to handle the mic and even how to dance the akpako dance style.

All things being equal it could be possible that Terry G’s son is the first youngest Nigerian celebrity’s son to be on instagram.

The two year old Teerex was also seen operating his own instagram page on his father’s Android phone which was recently opened @princeteerex with about 15 posts, 110 followers and 3 following.