Home National News Odd News The Most Remarkable Newspaper in the World Is Written by a Bunch...
Facebook
Twitter
WhatsApp 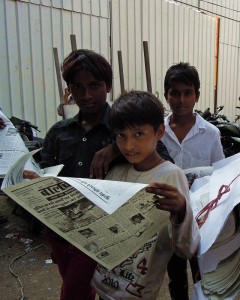 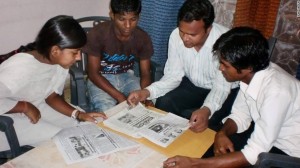 ‘Balaknama’, or ‘Children’s Voice’, is a quarterly publication that’s completely written and run by children living in New Delhi’s slums. With a readership in the tens of thousands, the newspaper is being hailed as one of the most impressive in the world.

Backed by the Indian non-profit organisation Chetna, Balaknama publishes contributions from a federation of Indian children who work for a living and live off the street. It started with only 35 child-contributors, but the stories come from various Indian states like Uttar Pradesh, Bihar, and Andhra Pradesh.

Written in Hindi, the paper covers a range of serious subjects that highlight the problems faced by Indian street children. A typical issue would contain articles related to topics like police brutality, child marriage, and illegal child labor. It’s not what you’d expect from a children’s newspaper, but Balaknama is known for reporting hard truths and harsh realities.

16-year-old Chandni is in charge of compiling reports and deciding which stories will go to print. 14-year-old Jyothi, who used to work as a trash collector, is now a contributor. So is 16-year-old Shambhu, who washes cars during the day and works at a hotel during the night.

Shanno, the paper’s 19-year-old editor, learned to read under a tree in an open-air charity school. She writes the stories of those who can’t read or write, but are determined to have their voices heard. Indeed, the contributors of Balaknama are a fiery band of children who want the world to sit up and take notice of them and their plight.

“It was a problem that no one gets to know about us – how we live, in what conditions do we live,” said Chandni. “We decided that it was a great idea. That us children would publish a newspaper together.”

“The children whose stories get published in the Balaknama newspaper, their world is full of darkness,” she added. “And that is how they want us to depict their lives. That they are working day in and day out.”

Jyothi revealed that the kids who work for the paper do receive a bit of training beforehand. “We are given education, and taught how to write articles,” she said.

Shambhu says that working for a newspaper is a dream-come-true. “So I thought, there are so many street children like me, one by one I will get their names published in the newspaper,” he explained. “Earlier, I was into drugs as well, but I got out. There are some kids like me who still take drugs and they aren’t able to get ahead in life.”

New Delhi alone is reported to have over 500,000 child laborers, many of whom live in appalling conditions and abuse drugs and alcohol. There are at least 11 million children living in slums across the nation, working on the streets, without an education, and many of them aren’t even officially recognized. With no access to food rations, books, healthcare, or any other government aids, these children are often forced to work in terrible conditions to keep body and soul together.

The staff at Balaknama reaches out to such children and gets first-hand accounts of their stories in the form of facts or poems. They hold a meeting later to discuss these stories and decide which stories need to be published. The child reporters aren’t paid, but they do receive an allowance to cover travel and other expenses for the paper.

The non-profit Chetna takes care of the paper’s production costs, and sells the final print at a nominal price of 1 Rupee. The proceeds from sales are used to help improve the living conditions of street children.