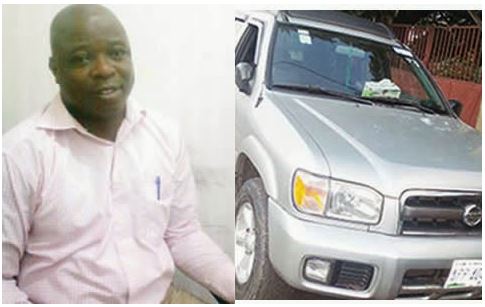 The head of operations, Security Unit of the University of Lagos, Sunday Adejumo, was killed on Friday August 29th by suspected assassins at a beer parlor on Oyenuga street, behind St Finbarrs str., Akoka, Lagos.

Adejumo, 50, was drinking with some friends at a beer parlour called Daniel’s Place when three men walked up to him, dragged him off his chair, stabbed him before they shot him dead. Continue…

Narrating what transpired the night he was killed, a resident of the area who spoke anonymously with Punch said it is believed that he was killed by some cultist

“When the gang got in, they went to where he was sitting. They had different weapons, ranging from cutlasses to guns. One of them went to him, hit him in the chest and he fell down. He then brought out a gun and shot him point blank. On the table where he was drinking with his friends were a pay slip, his ATM cards and his car key.”

Police sources say his body was taken to the Yaba mortuary. Meanwhile the three friends he went to the beer parlor with as well as the owner of the beer parlor are now being interrogated.
Deputy Police Public Relations Officer, Lelma Kolle, said the unknown gunmen actually tried to escape with the deceased car after they killed him

“Investigations revealed that the man parked his car a distance away from where he was drinking. The police also discovered that there was a blood stain on the car and the car key was found within the vicinity, also with blood stains. This can only mean that after they killed him, they attempted to go away with his car. They actually succeeded in opening the car because there were blood stains on the car seat. But the car did not move because of the security system in it. The owner of the bar has been arrested and he has made statements. We cannot categorically say whether this was a robbery or an assassination plot. The matter is still under investigation.” he said

The management of the University of Lagos is yet to make a statement on the incident.