Home News Feed ‘Why I Brought Three Of My Friends From Delta State To Rob...
Facebook
Twitter
WhatsApp

Six suspected armed robbers said to be members of a gang that has been terrorizing Lagos, Delta and Imo states for long have been arrested by operatives of the Special Anti-Robbery Squad, SARS, Ikeja, Lagos. 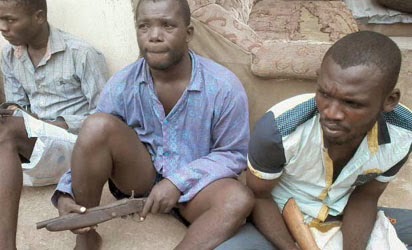 The suspects identified as: Emmanuel Erherhie, Joseph Ovologbarho, Innocent Ibe, Victor Ezenwa, Oyoma Akbojiyouwi and James Ukerume, were arrested after they carried out an unsuccessful robbery operation in Lagos.

Their arrest, according to Police sources, followed an intelligence report received by the Lagos State Police Command on a robbery operation in Festac, which led to arrest of one of the suspects, Innocent Ibe at the robbery scene while others fled.

It was gathered that after a long manhunt, other members of the gang were arrested in different areas in Delta State. Recovered from the suspects were four locally made guns and cartridges used for the operation.

Crime Guard gathered that the leader of the gang, Emmanuel Erherhie contracted his gang members in Delta State to rob his Uncle in Lagos after his uncle allegedly chased him out of his house after he was released from prison.

Suspects account
During interrogation, 24-year-old Emmanuel Erherhie, said he got arrested because he organised robbers to rob his uncle who lives in Festac. According to him, “I brought three of my friends from Delta State to rob my uncle in Lagos. But the robbery operation failed as we were arrested. I lived with him for about four months. He drove me out of his house after I had an accident with his car and the vehicle got damaged beyond repair. I hit another car which was also badly damaged so, the owner of the car I hit arrested me that night. When I called my uncle, he said he had no hand in that. Nobody came to bail me. The case was charged to court and eventually I was sent to prison for six months.

“But for the help of my elder brother, Godwin Erherhie who assisted to secure my release, I would still be in prison. When I eventually got released from Kirikiri prison, I came back to my brother’s house; he chased me out, saying that I was no longer welcomed in his house,and he didn’t even allow me to pick my belongings. I was wasting away, jobless and roaming the streets and my brother refused to help. I left Lagos out of frustration to Delta State. While I was in Delta State, I met my childhood friend Joseph, and told him to help me organise people for the robbery operation. I stayed two months there strategising and perfecting plans to rob my uncle.

We were four who robbed the house.
“If we had succeeded in the operation, I would have used the money to process travel documents to travel to Austria. A friend of mine who I met when I was an apprentice had promised to help me process documents if I had the money. When I was living with my uncle, I worked as a sales boy in his furniture company. He wasn’t paying me; he only gave me pocket money.

Joseph Ovologbarho, 22
“I am a plumber from Delta State. Some months ago, Emmanuel came to my house in Delta and said I should assist him with people to rob his uncle in Lagos. So I arranged with two of my friends, Innocent Ibe and Victor Ezenwa who also participated in the operation. We got the guns from Oyoma Akbojiyouwi, when I went to purchase bullets from him. The gun I am holding is for my grandfather, he is the eldest man in my community so, he uses the gun for protection. I got involved in the operation because Emmanuel promised to give me large amount of money after the operation. I never knew he went to prison. We came to Lagos in the month of July and we carried out the operation on July 18, 2014. These local guns were found in his house when we took SARS operatives to the place.”

Victor Ezenwa, 22
“ I am from Imo state, I am a professional painter, and my friend brought us to Lagos to rob his uncle. He paid our transport from Delta State and when we came, he lodged us in a hotel in Volks along Badagry express way. We spent a day in the hotel before we went for the operation. He told me that his uncle is very wealthy and that he keeps a lot of cash, including foreign notes in the house. He promised to give me a lot of cash to start up my business. That was why I agreed to participate in the operation. I regret participating in this operation. I will never rob in my life again. “
Innocent Ibe

I am from Imo State, but I reside in Delta State. My friend Joseph brought me into this operation; they informed me that his uncle had a lot of foreign currency kept in his house. He told me that we are not using gun, that all we needed to do was to follow him to the house. Emmanuel promised to reward us handsomely after the operation but unfortunately we were arrested.”

Oyoma Akbojiyouwi 3
“ I am the youth leader in my community in Delta State and we use these locally made guns for security purposes. When we arrest suspects, we hand them over to the vigilante group and they will then hand them over to the police. Some months back, Joseph, a member of the vigilante came to me with their vehicle to get bullets to go on patrol. So, I gave him and he went away. Last week, SARS operatives came to my father’s house in Delta State and arrested me for selling bullets to Joseph. According to police sources, they brought a pump action for the robbery operation in Lagos. We got to my uncle’s house at about 7pm for the operation. Unfortunately, innocent was caught while we were attempting to break into the building, the rest of us fled but were later arrested. Emmanuel and the other members escaped back to Delta State but were traced and arrested.