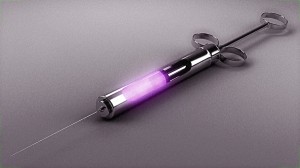 A man was recently stabbed with a syringe by a strange woman then told “welcome to the HIV club!”

Seattle police are still searching the city for the woman. Investigators have contacted local business in case any surveillance footage which could give officials a big lead in the search.  After businesses failed to offer any footage of the woman, investigators did in fact find a syringe at the scene of the attack.

Police stated that the victim did not report officials about the incident until two days after the attack.

The attacker is described as a white female, in her late to mid-20s, 5’6’’ with a medium build and straight parted blonde hair.

The victim, that just got the scare of his life, told police that he had been attacked with a syringe and it was completely unprovoked. Also, he says that there was visible blood where the needle pricked him. Subsequently the man searched the Seattle in hopes to find the woman.  He eventually went to Harborview Medical Center although it is still uncertain whether he tested positive of HIV.