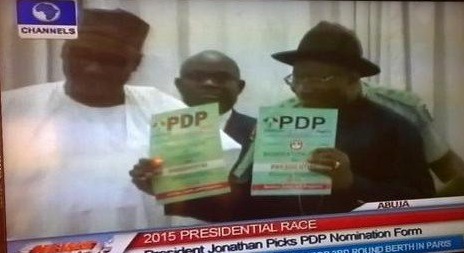 President Goodluck Jonathan on Thursday picked the nomination form of the Peoples Democratic Party, PDP, at the national secretariat of the party in Abuja, to enable him run for a second term.

The president was accompanied to the Wadata Plaza national Headquarters of the party by Vice President Namadi Sambo, top government functionaries and party big wigs.

Security was tight at the Wuse secretariat of the ruling party as President Jonathan during his speech at the ceremony, thanked all those who contributed towards the purchasing of the PDP nomination form, which costs 22 million naira.

At the close of his speech, which signalled the end of the ceremony, the president proceeded to a closed-door meeting with the national chairman of PDP, Alhaji Adamu Mu’azu.

In an exclusive interview with Channels Television’s Chukwuma Onyebusi, the president said that the event meant it was time “to do more”.

Jonathan stressed that his and the party’s commitment was to take the country to the next level. “We have set up the structure. We will never go back. We will move faster”, he pledged.