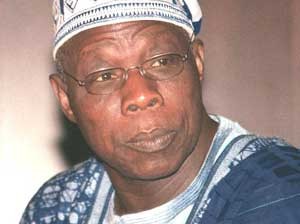 Ahead of the 2015 general election, the Abeokuta home of former President Olusegun Obasanjo has turned to a Mecca of sorts for politicians across the political divide, who seek the wise counsel of the elder statesman.

To underscore his relevance on the political scene and wealth of experience from which politicians can tap from, Obasanjo on Friday played host to the Senate President, David Mark, as well as prominent chieftains of the All Progressives Congress, APC, and Accord Party, AP, including Asiwaju Bola Tinubu, Rasheed Ladoja and Segun Oni.

‪The senate president, who was accompanied by Governor Emmanuel Uduaghan of Delta State and former PDP national women leader, Josephine Anenih, arrived at Mr. Obasanjo’s hill top mansion at about 2p.m. and departed at about 3.45p.m.

Speaking with journalists, Mark described Mr. Obasanjo as “the father of the nation”, and key to the progress of Nigeria.

‪On his exact mission, the senate president said, “We have come to discuss with him and raise some basic issues that affect both the party and the nation at large. They were discussions that would move this nation forward. You know his passion for this nation is unquantifiable; so, we have really had a good discussion session with him”.

‪On the protracted crisis in Ogun state chapter of Peoples Democratic Party, and whether it was part of the meeting’s agenda with the ex-president, Mr. Mark said, “We are working as a party to make sure we put everybody who wants to be on board, on board and congresses are coming up; so, I think this is normal”.

‪A chieftain of the APC, Mr. Tinubu, after his session with Obasanjo, said he was there to discuss because “we cannot know it all”.

“We need to consult. Equally, we took an observation of his former boys, who are running for presidency in our party, and sought his opinion about them”, Mr. Tinubu said.

He, however, insisted that he would not disclose exactly what was discussed at the meeting.

‪Asked to comment on the state of the nation at 54, Tinubu, a former governor of Lagos, described the country as an “invalid baby in the incubator”.

He called for a “common sense revolution”.

“With a common sense revolution to overhaul our security, the army will respect the people; with a common sense revolution in job creation, there will be better conditions of living for everybody,” he said. ‪”It is high time we take our country back from corruption and replace the clueless leaders with the purposeful, revolutionary leaders that will rehabilitate this country and fix everything back. It is a rescue mission; we must take our country back from mismanagement”.

Tinubu stressed that Nigeria did not have good leaders. “They are clueless, while the followers appear sadistic. We like being punished”, he said.