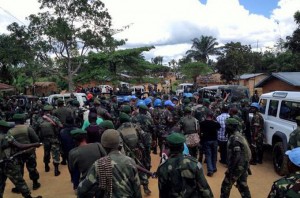 Armed men have raided a jail in the town of Butembo in the eastern Democratic Republic of Congo, releasing all 370 prisoners, military sources reveal.

Reporters from east DR Congo, said the Congolese army and the town’s mayor confirmed the raid, but that there were conflicting reports as to who was responsible for the incident late on Saturday night.

The North Kivu province of eastern DR Congo has been hit by gruesome violence over the last 10 days, with officials and local rights groups saying that about 80 people have been killed.

The blame for many of the attacks has been leveled at the Allied Democratic Forces (ADF), a secretive Ugandan rebel group hiding out in the neighboring country. It has terrorized the area for much of the last two decades.

On Thursday, about 26 people were slaughtered with machetes in Beni, while 50 km away in Eringeti, another 24 people, mostly women and children, were killed when militia entered the town and used machetes, axes and hoes to kill them.

“The Congolese military said the Allied Democratic Forces (ADF) were responsible for the jailbreak but the mayor of the town says the attack on the prison was conducted by ordinary bandits,” a reporter said.

“The mayor said the attackers were speaking Nande, suggesting they were Mai Mai (fighters) or bandits, and not ADF fighters who who were more likely to speak Luganda or Swahili.”

Luganda and Swahili are the most common languages in Uganda.

Local government officials reveal that the region’s jails only held about 74 ADF fighters because they are known to fight to the death rather than face capture.

Whoever is responsible for the incident, it will add to a growing sense of fear and insecurity in a region where hundreds of people have already fled their homes to escape the violence of the last 10 days.

No one was injured in the attacks and by Sunday morning around 20 of the escapees were re-arrested.

Webb said that both the Congolese government and the UN blamed the ADF for the incidents in Beni and Eringeti, but that has not been independently confirmed.

“The ADF are elusive, and secretive, so we cannot confirm with them. We have never been able to contact them,” another reporter said.

“Survivors may know more but they are generally scared to to blame anybody specifically and just describe the attackers as ‘militants’ or ‘rebels’. The ADF controlled a lot of this area for about ten years, and could easily still target people.”

On Saturday, Lambert Mende, a spokesman for the Congolese government, said his government believed the upswing in violence suggested that the ADF had changed tactics.

Meanwhile, the head of MONUSCO, the UN mission in DR Congo, denounced the escalating tensions, calling for “this sequence of violence, killings, murders and violations of human rights in the territory of Beni” to stop immediately.