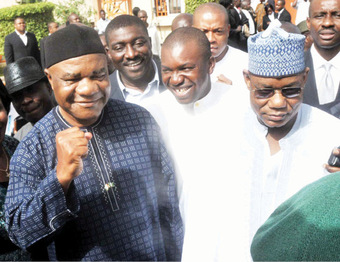 A former National Chairman of Peoples Democratic Party, PDP, Vincent Ogbulafor, said on Sunday that his acquittal by an Abuja High Court proved the judiciary as the last hope of the common man.

Mr. Ogbulafor said this in an interview with journalists in Umuahia while reacting to the judgment of the court.

The court had acquitted the PDP chieftain of a 17-count charge of corruption brought against him by the Economic and Financial Crimes Commission, EFCC.

“I feel very happy, great and on top of the world over the judgment. It is not easy to be acquitted of corrupt charges, 17 of them and you come out of them all and not found guilty in any.

“It’s something I feel happy about and I give glory to God. To me, this shows that the judiciary is the last hope of the common man”, he said.

Mr. Ogbulafor attributed his travails to the handiwork of his enemies, saying that “at no time during the trial did I feel any guilt or entertain fears of any negative outcome”.

He said that as a Minister in the Presidency, he never awarded any contract nor participated in the process of awarding contracts.

Mr. Ogbulafor said that the experience would not deter him from assisting others but warned public office holders to be careful with the kind of people they render help to.

“People change like chameleon. So this time, I will look well before I leap”, he said.

Meanwhile, Mr. Ogbulafor, who is a chieftain of PDP in Abia, has lent his support to the party’s decision to zone the governorship slot to Abia South Senatorial District.

He said that since it was the decision of the party caucus, which he belonged, “every member of the party is expected to abide by it”.

He, however, said that because the party believed strongly in democratic values, the race was still open to other aspirants from other senatorial districts who wished to run.