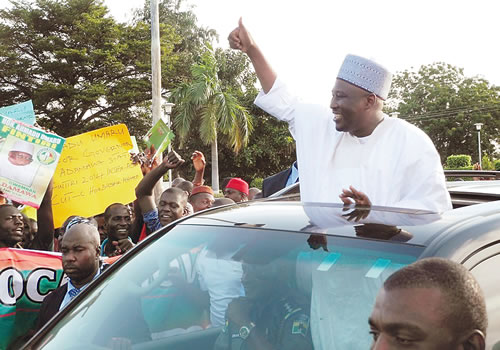 In continuation of his campaigns towards the October 11 governorship by-election, Adamawa State Acting Governor, Alhaji Ahmadu Fintiri, has promised to create 1000 jobs within two months if elected.

Fintiri, who made the promise when his campaign train berthed at Maiha, assured his teeming supporters that he would create the jobs for teeming youths in the state.

He also promised to complete all abandoned General Hospital projects in the state including that of Maiha, which has deprived the people of having access to medical services.

According to him, as a member of the state Assembly, he was aware that lawmakers had approved funds for the completion of Maiha hospital and wondered why the ousted administration of Murtala Nyako failed to carry out the project.

Fintiri, who is the PDP candidate for the by-election, reiterated his mission to offer selfless service to the people of Adamawa as seen in his two months of service as acting governor, adding that he was committed to making a difference by working the talk.

Similarly, the state PDP chairman, Chief Joel Madaki, commended the large turn out and reception accorded the acting governor and his entourage and urged the people of Maiha to translate their support into votes.

“I have brought you a tested and reliable hand; I want you to support him as you use to do to all our party candidates since inception of this democracy.

“He is a performer and will never disappoint you”, Madaki said.