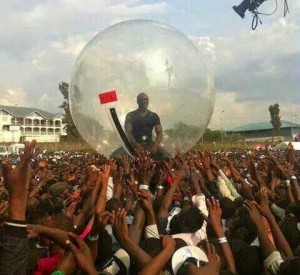 Senegal-born and American R&B superstar — Akon has been accused of going to extreme lengths to avoid catching Ebola during a concert in Africa.

The ‘Locked Up’ singer climbed inside the airtight blow-up during a performance in Goma, in the Democratic Republic of Congo, on Sunday and rolled over the crowd, pushed along by the outstretched hands of 60,000 screaming concert-goers.

This is something he has done before during performances before the Ebola outbreak but his actions has prompted breathless reports from certain media outlets.