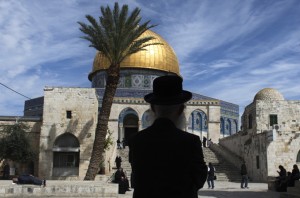 Clashes have erupted between Israeli security forces and Palestinian youth in East Jerusalem a day after a gunman on a motorcycle shot and seriously wounded a prominent right-wing Jewish activist.

Israel announced shutting down of the al-Aqsa mosque following Wednesday’s shooting of Yehuda Glick, who has advocated for greater Jewish access to the sensitive holy site known to Jews as the Temple Mount and to Muslims as the Noble Sanctuary.

Neither Jewish nor Muslim worshipers would be allowed to visit the compound, as it remained closed “until further notice”, Israeli public security minister said.

Israeli police on Thursday shot dead Mutaz Hijazi, a Palestinian whom the police claimed was responsible for firing at the American-born rabbi.

Sources reveal that Hijazi, 32, was killed in al-Thori neighborhood in East Jerusalem.

He had spent more than 11 years in an Israeli prison – mostly in solitary confinement before his release in 2012, according to the Palestinian Prisoners Society.

The developments threaten further escalation in Jerusalem, which has been fraught lately with clashes between Palestinian protesters and the Israeli police.

The latest shooting took place outside a conference promoting Jewish access to the holy site, a hilltop compound in Jerusalem’s old city.

Israeli lawmaker Moshe Feiglin said a man approached Glick outside the conference and spoke to him in “heavy Arabic-accented Hebrew”. He then opened fire at point-blank range and fled.

Police spokesman Micky Rosenfeld said that the police had set up roadblocks and were searching for the suspect.

In recent months, clashes have erupted at Jerusalem’s most sensitive holy site between Palestinians and Israeli police, over what Palestinians see as Jewish encroachment on the site, the holiest in Judaism and the third holiest in Islam.

Israel claims it allows free prayer to all, but Palestinians say Israel is unilaterally widening access to accommodate larger numbers of Jewish worshipers.

Amid the violence, Palestinian President Mahmoud Abbas has recently called for Jews to be banned from the site, urging Palestinians to guard the compound from visiting Jews.