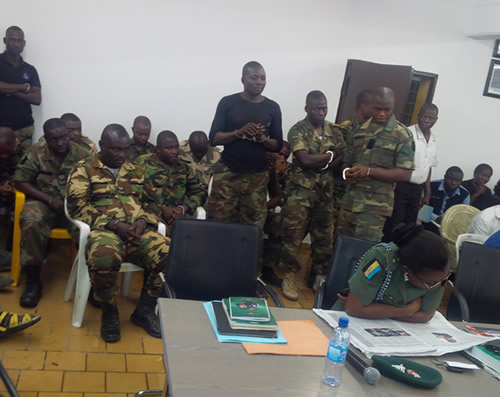 An international human rights advocacy group, Amnesty International, has kicked against the death by firing squad sentence passed on 12 Nigerian soldiers by a military general court martial in Abuja for mutiny, among other offences.

The court three weeks ago, found the soldiers guilty of attempted murder for firing shots at the General Officer Commanding the newly created 7 Division of the Nigerian Army, Maimalari Barracks, Maj.-Gen. Ahmed Mohammmed, in Maiduguri, Borno State and sentenced them to death.

The sentence has generated ripples across the land with a cross section of Nigerians calling on President Goodluck Jonathan to intervene by commuting the soldiers’ death sentence to life imprisonment.

AI’s Media Director, Ms. Susanna Flood, in reaction to the sentencing, said the organisation was opposed to the death penalty, regardless of the offence.

“The reason we have not said anything about (the conviction) was because we weren’t able to monitor the trial and assess that it was fair, which is very important for us. We have to back up our comments with facts.

“We oppose the death penalty in all instances. So, in the case of these soldiers, we would be opposed to their death penalty. We are looking into the trial and trying to ascertain more facts about all that went on or the situations that led to these men being, first of all, charged and then convicted. We are now investigating”, she said.

Ms. Flood noted that human rights change would not happen overnight and that one needed to look at the proverbial big picture.

“If you look at our work on the death penalty, and you examine the statistics when we launched our campaign against the death penalty, which was more than 20 years ago, compared with the figures now, you will notice that the number of countries around the world executing prisoners is decreasing.

“Recently, we got news from Israel. Israel has had a particularly harsh form of detention for African asylum seekers, where they have been locked up in unacceptable conditions. We heard that the Israeli Supreme Court had overturned the ability to do this and this detention will no longer continue for Africans”, she said.