The leadership of the All Progressives Congress, APC, has blasted Doyin Okupe, the Special Adviser on Public Affairs to President Goodluck Jonathan, over the comments credited to him. 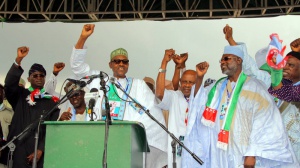 The National Chairman of the APC, John Oyegun, on Thursday said Okupe lacks knowledge of history as well as practical reality.

He described as vague and unrealistic if the People’s Democratic Party- led Federal Government believes that it would defeat the main opposition party in the 2015 general election.

“Well it means that they are not good students of history and they are not realistic and practical. Before now, there was no truly national alternative in this nation; before now, we had the ANPP that was domiciled in the North East, we had the ACN that was domiciled in the South West and off course they had members all over the places. We had APGA that was largely domiciled in the South East. These three forces have been wielded together. Today we have a national party that is represented, the APC, strongly in every corner of the country. Today man, woman, child are crying for change and the dynamics are different and l pray they continue to mis-read the signs of the changing times and that would be good for us,” Oyegun said.

Meanwhile, the Campaign Organization of the former head of state, Gen. Mohammodu Buhari has advised the presidency to carefully go through Buhari’s declaration speech before resorting to criticisms and defamation.

This was contained in a statement issued on Thursday by a member of the leadership of the campaign organisation, Osita Okechukwu.

He said the statement issued by the presidency was contrary to what is obtainable and assured that Buhari is bringing the long awaited change to Nigeria as clearly stated in his declaration speech.

The team reiterated the provision of maximum security of lives and property, youth employment, and promised to curb the increasing corruption currently bedeviling the country. He described Buhari as a patriot who does not need to school in Harvard to know that millions of Nigerians are struggling with extreme poverty, and barely making a living.

“It is our candid view that if President Goodluck Jonathan has in the past four years provided Nigerians with adequate security, waged strident war against corruption, and ruled according to the spirit and letters of the 1999 Constitution of the Federal Republic of Nigeria, as amended; the urgent call of millions of Nigerians for GMB to come and fix the country and stop the dangerous slide of Nigeria into failed state, could not have arisen,” he said.

“In sum, we will restrain ourselves from mudslinging and advise the presidency to do so as well as; for if we are forced to release the ungodly dossier in our docket, the country will troop the streets,” Okechukwu said.

It would be recalled that on October 15, 2014, the Presidency described former vice president Atiku Abubakar and former head of state Major Gen. Muhammadu Buhari of the All Progressive Congress as serial losers.