Armed robbers who killed Newswatch Editor arrested, say why they killed him 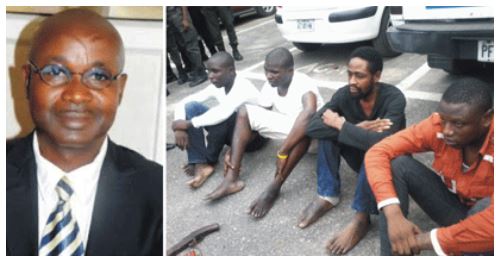 The armed robbers who shot and killed the Deputy Editor of Saturday Newswatch newspapers, Toyin Obadina (pictured left0 on February 3rd along the Itoikin Old Ijebu-Ode road, have been arrested by men of the Lagos state police command, eight months after they carried out the dastard act.

The notorious armed robbers named Adeshina Festus, Sunday Samuel, Ibrahim Adeokin and Babatunde Makinde, (all pictured right) were arrested after two members of their gang led the police to their hideout in Ikorodu.

Speaking on how they were arrested, the Lagos state police commissioner, Kayode Aderanti, said;

“Based on the information, a team of crack detectives, led by the officer in charge of Special Anti-Robbery Squad, SARS, Abba Kyari, swung into action and two suspected members of the gang, Ibrahim Adeokin and Babatunde Makinde, were arrested. Immediate search conducted on them led to the recovery of two cut-to-size locally-made single barrelled short guns, with 12 rounds of live cartridges. During interrogation, they confessed to belonging to a six-man robbery gang who has been terrorising Lagos State and its environs. They also confessed to be responsible for the killing of the owner of a Toyota Yaris car with registration number AKD 701CE, which they snatched and later abandoned with the corpse at Ikorodu. The victim was later discovered to be Mr. Toyin Obadina, the Deputy Editor of Saturday Newswatch. Their confession later led detectives to Ikorodu area where one Festus Adeshina and Sunday Samuel were also arrested. They mentioned Olasheun and Omo Alhaja, who are at large, as members of their gang, while Oke and Benjamin, who they claimed were members of the gang, were killed in a shoot-out with operatives of SARS at Mile 12 area.” he said 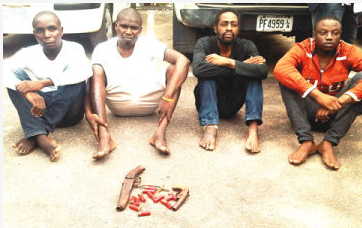 On how and why they killed the 50 year old editor, one of the suspects, Shina Festus said Mr Obadina was shot dead by their leader because he tried to struggle his car with them

“We were coming from Imota, while he (Obadina) was going inward. On reaching a bad spot, he slowed down and we blocked him with our vehicles: one in front and the other behind. Four members of the gang came down from the vehicles. While two of them positioned themselves to wade off intruders, Oke and Benjamin went to the man in the car. An argument ensued between Oke and the man, and Oke shot him dead. When one of us asked Oke why he shot the motorist, he got angry and shot the gang member for challenging his authority. At the end of the operation, we collected his phone, laptop and some money we saw in the car. When we got to our hideout, Oke told us that the man struggled with him. We did not know the man was a journalist and my job is to drive the operational vehicle.” he said

Police Commissioner said the suspects would immediately be charged to court.