An Army Colonel, some junior officers and soldiers reportedly helped members of the dreaded terrorist group, Boko Haram in the North eastern part of the country.

According to Vanguard, the shocking revelation which was made at the weekend occurred as the military personnel were involved in the offensive to reclaim communities taken over by the Boko Haram terrorists in Adamawa State. 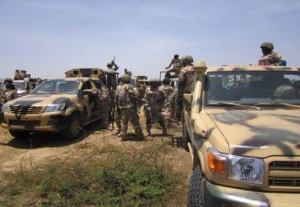 It was gathered that the Army authorities were angered by the report and ordered the arrest of the commander, the junior officers as well as the soldiers under his command.A high ranking military personnel who did not want to be named said, the colonel who is a Muslim was Commanding a team of three Armoured Personnel Carriers, APC’s, with the capability of firing up to a range of 1.5kilometres or more, deliberately set the APCs on fire between Gulak and Madagali, and ran into the bush with his team instead of firing at the advancing terrorists.

A source that was aware of the development revealed that before the embarrassing incident occurred, the Special Forces of the Nigerian Army who commenced the putsch to rout Boko Haram terrorists from Bazza, Michika, Gulak and Madagali from Vimtim, had successfully dealt with the sect, and inflicted heavy casualties on the terrorists up till Gulak.

He said between Gulak and Madagali, the Colonel who had all along been prided with air surveillance reports, was again informed that Boko Haram terrorists were approaching his team in six Toyota Hilux Pick Up vans from the Madagali axis of the state.

“However, rather than blasting and taking out the terrorists in their pick-up vans; he ordered his soldiers to jump out of the APC’s and set the armoured tanks on fire, without realising that he was being monitored. This was shocking because the terrorists were armed with weaponry which were grossly inferior to the firepower of the Nigerian Army Amoured tanks. After accomplishing the sabotage act, the Colonel and the junior officers and soldiers ran away into the bush, claiming that they were overpowered by a better armed group of Boko Haram terrorists,” the source said.

The source further disclosed that the action of the Colonel and soldiers under his command ascertained the believes by the top hierarchy of the military that there were so many fifth columnists in the army working against the country’s determination to wipe out Boko Haram terrorists from Nigeria.

However, a Board of Inquiry, BoI, had been set up by the Army authorities to investigate the Colonel and his soldiers after which a Military Court Martial would be set up to try them for conspiracy, treason and willful sabotage among others.

Reacting to the development, a senior officer said: “You can now see why the Military Court Martial which is currently sitting is inevitable. The uninformed would feel that soldiers who are fighting the nation’s battle are being unjustly punished. But the truth is that many of them are sabotaging Nigeria and making the insurgents look formidable for reasons that cannot be explained. Some of them appear sympathetic to the insurgents. How can it be explained that several APCs that cost up to $1million each in some cases or more will be willfully destroyed by Commissioned Officers, COs, who swore to defend the territorial integrity of their nation, just to help terrorists? That is treason of the highest order.”

The source hinted that the new strength and determination with which Nigerian soldiers had been fighting Boko Haram, resulting in the killing of several commanders of the sect as well as hundreds of their foot soldiers, was bore out of the resolve of the Nigerian army high command to sanction any soldier pursuing a different course aside that of the Federal Government.

It would be recalled that Air Chief Marshal Alex Badeh, the Chief of Defence Staff, CDS, had last week cleared the air that the death penalty passed on 12 Nigerian soldiers by a military tribunal was lawful and in accordance with military dictates.

The CDS made this known while speaking at a three-day conference organised by the National Security Adviser in collaboration with Trim Communication Nigeria Ltd on Media/Security relationship in crisis management.

“The day you join the military you have signed off whether life or death, and it is obey before complaint. How can a soldier just jump out of the APC because you want to donate APC to Boko Haram; and somebody is there talking about constructive mutiny. The laws are there, if you run away from the enemy, you will die and that is what the military law says. Apart from the old Nigerian law, we abide by the military law. Nobody forces or conscripts anybody into the military. It is a voluntary service, and so if we have this type of challenge, you should be able to confront it and not to run away,” Badeh said.

It would be recalled that on October 9, the European Union (EU) condemned the death sentence handed 12 Nigerian soldiers by a military tribunal over charges of mutiny.  The international body seems not to be the only group against the sentence as some other concerned Nigerians have also reacted to the development.

The Nigerian Army on October 3, 2014, set up a General Court Martial to try another 97 personnel for various offences allegedly committed in the ongoing counter-terrorism operation in the North-Eastern part of the country.