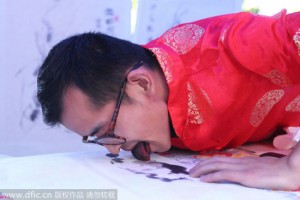 You can say Chinese artist Han Xiaoming has great ‘taste’ in art – he actually uses his tongue as a brush to create paintings! Luckily, he doesn’t use oil paints or acrylic, just sweetened food dye.

Han, 35, claims he came up with the technique while trying his hand at traditional Chinese sugar painting. The ancient art form involves the use of melted sugar to create figures such as dragons, monkeys, fish, dogs, birds and flowers. Halfway through his work, however, sweet-toothed Han got hungry and decided to take a sip of the sugary paints used to paint the sugar artworks. He loved the taste so much that he finally ended up abandoning the paintbrush and continued to paint with his tongue. Eventually, he completely switched to using his tongue as a tool for his art.

Han has received nationwide praise for his unique interpretation of sugar painting. He is now travelling around China, giving several performances of his self-developed tongue-painting technique. During one of his performances at Hangzhou city in Zhejiang Province, he dipped his tongue in water colored with food dye and enthralled the crowd with his paintings. He completed two pieces in 40 minutes, which he later sold to the crowd.

According to Han, the tongue, when used properly, can be very advantageous to the artist because it creates a brush stroke that is unique to that artist. “It is a great way to really feel a connection with the artwork you are creating, using the tongue so you can only feel directly the paper rather than through the brush, but you can also taste it as well,” he said.

As bizarre as this painting technique may seem, Han Xiaoming is not the only tongue painter in the world. Two years ago, we featured Ani K., an Indian artist from Kerala, who actually used his tongue to paint with oil-based paint.