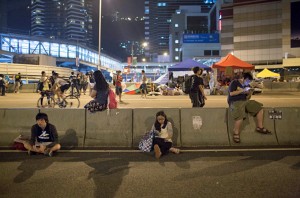 Protest leaders in Hong Kong have agreed to hold talks with the pro-Beijing government as their numbers dwindled and they faced growing pressure to end their sit-in.

As day breaks over the Chinese autonomous region on Tuesday, only a hundred or so protesters have remained at the central business district, significantly down from the tens of thousands that massed over the weekend.

Many heeded the call but several hundred weary demonstrators remained at the main site in downtown Admiralty on Monday night, with similar numbers across the harbour in Mongkok.

Student leaders denied their campaign for free elections had lost momentum, saying they would remain on the streets, even as they announced that talks with the government would take place this week.

But Leung issued another warning to disperse, saying they should leave the flashpoint district of Mongkok — which has seen ugly scuffles with triad mobs – “as soon as possible”.

“To prevent violent crime and to reduce the amount of injuries, police will take action at the right time,” Leung said in a televised address.

The protesters and their well-organised campaign have enjoyed strong public support, with sympathy soaring after police used tear gas on the crowds. But after shutting down parts of the city for more than a week, irritation has grown.

A four-day environment symposium gathering 11 Nobel winners that was due to open on Wednesday has been scrapped “due to the sustained disruptions in the city,” the organisers said Monday.

However, secondary schools closures in affected areas, which had been a particular headache for families, were lifted and the government said primary schools would reopen on Tuesday.

Those protesters who remained were battling fatigue Monday, as the energy of a once-euphoric campaign began to subside.

Student leaders held a second round of “preparatory talks” with a government representative late Monday, agreeing to move towards formal negotiations.

Ray Lau, undersecretary of constitutional and mainland affairs, said: “We hope there will be mutual respect shown during the meeting. We hope we can hold it this week.”

Student leaders said the protests would continue as the dialogue with the government progressed, with Joshua Wong – a 17-year-old firebrand who has become one of the faces of the protest movement – making a rallying cry in Admiralty for demonstrators to continue occupying the business district.

The protesters are demanding free and open elections to select the former British colony’s next leader in 2017. China’s Communist authorities insist only pre-approved candidates will be able to run, a system critics dismiss as “fake democracy”.

Handed back to Chinese rule in 1997, Hong Kong is governed under a “one country, two systems” deal that guarantees civil liberties not seen on the mainland, including freedom of speech and the right to protest.