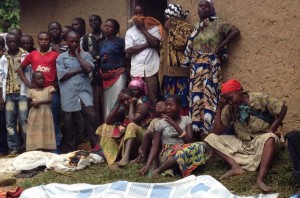 At least 22 people, most of them women and children, have been hacked and clubbed to death in the eastern Democratic Republic of Congo, just days after a similar massacre took place, a government official said.

The attack on Friday evening in the town of Eringeti, in North Kivu, left 10 women, eight children and four men dead, a local government official told the AFP news agency.

“Most of the victims were killed with machetes, axes and hoes,” the non-governmental group Civil Society of North Kivu said in a statement.

Several children had their heads “bashed against the walls” it said, blaming the Allied Democratic Forces (ADF), a Ugandan rebel group, that has terrorised the area for much of the last two decades.

A reporter reporting from the town of Beni, said the latest attacks took the total number of people killed in last 10 days to over 80.

Steve Wembi, a journalist based in Kinshasa, told Al Jazeera that some of the victims were also shot to death and there were many others who had escaped with injuries.

“A military source told me that 11 out of the 22 victims were Congolese soldiers but the Civil Society of North Kivu maintains all victims were civilians,” Wembi said.

The attack occurred some 50 km from the town of Beni, where at least 26 people were slaughtered with machetes on Thursday, raising doubts about government claims that the Ugandans had been defeated.

Amisi Kalonda, government administrator for the Beni area, said he was heading to Eringeti along with an army contingent but was so far unable to say if the rebel ADF – who have bases in the DR Congo – were to blame.

Radio Okapi, a UN-run radio channel based in Kinshasa, reported that the bodies of those killed on Thursday were laid to rest on Friday.

To show their solidarity with the victims of Beni, national deputies observed a minute of silence during the plenary on Friday in the DRC capital, Kinshasa.

The Civil Society of North Kivu group said at least 79 people had been “savagely executed by the ADF” in the past fortnight, calling on the UN force in the country to contribute troops to help the army confront the rebels