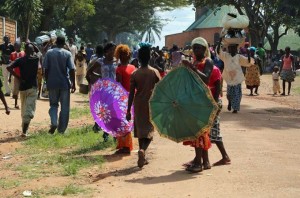 At least six people have been killed and hundreds forced to flee their homes after violence involving the “anti-balaka” militia broke out in the capital of the Central African Republic.

The fighting broke out on the main road to Bangui’s airport when peacekeepers attempted to remove an anti-balaka barricade.

Violence first erupted late on Tuesday in the district of Bangui near the banks of the Oubangi river, close to President Catherine Samba Panza’s residence, as armed men raided homes.

“The anti-balaka set fire to 22 houses. Three people were killed, including two burned alive in their homes,” said Joseph Tagbale, mayor of the district.

Samba Panza’s transitional government said that the increase in violence in the city, in which more than a dozen people have now been killed, was part of a plot to destabilize her administration.

The country was plunged into chaos when the mostly Muslim Seleka rebels seized power in the majority Christian country in March 2013, toppling President Francois Bozize.

Seleka’s rule was impaired by abuses that prompted a backlash from the mostly Christian anti-balaka militia.

France has deployed troops and an African peacekeeping force was beefed up and transformed into a UN mission to stem the sectarian violence.

Mayor Tagbale said that Rwandan peacekeepers, who were part of a UN mission that started last month, were deployed nearby to guard Samba Panza’s home but would not venture off the main road into residentional areas to protect civilians.

Myriam Dessables, a spokeswoman for the UN mission known as MINUSCA, rejected the accusation that the peacekeepers failed to step in.

“It’s absolutely false. The Rwandan soldiers intervened to stop the violence,” she said.

“They are afraid of the anti-balaka who have entered their neighbourhoods,” Reverend Jesus Martial Dembele, vicar general of the archdiocese of Bangui, said. “They killed people and burnt down homes.”

Tens of thousands of Muslims have fled to a northern enclave still controlled by Seleka, fleeing the anti-balaka attacks and effectively splitting the country in two along religious lines.

Samba Panza now has the task of guiding the country to elections expected towards the end of 2015.