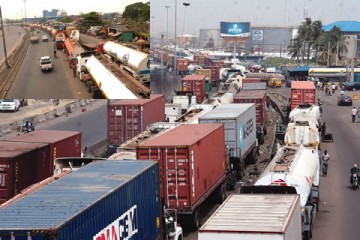 The Petroleum Tanker Drivers branch of the National Union of Petroleum and Natural Gas (NUPENG) workers on Thursday gave the federal government a 90-day ultimatum to fix the many bad roads that heavy duty tankers ply across Nigeria.

Specifically, the drivers stated that they had warned of a looming strike in parts of the South-East and South-South as a result of the deplorable state of the Port Harcourt-Eleme Junction road, Okigwe-Umuahia road and Jebba-Ilorin road.

Chairman of the tanker drivers, Mr. Salimon Olatidi, told journalists that members of the union had on the expiration of the ultimatum last month, avoided the aforementioned roads and refused to lift products on the affected axis.

He said the strike had entered its second week and the situation was becoming unbearable to residents in the areas.

Olatidi said his members had wanted to extend the strike to affect Lagos, Abuja and other regions in the north, but for the timely intervention of the Department of State Security Services, Federal Ministry of Petroleum Resources and the Chairman of Capital Oil Limited.

He said, “We want to inform Nigerians that after due consideration and wider consultation with stakeholders in the oil and gas industry, we have directed our members to resume work in these areas where we had earlier withdrawn our services.

“We don’t want to state the time duration that we are now giving the government to carry out urgent repairs on these roads as well as others, but if we wait for 60 to 90 days and nothing is done, by the time we strike nationwide people should not blame us”.

Olatidi said the union agreed to heed the call of the DSS and the petroleum ministry, adding that it had given “government more time to attend to these roads.

“We, like every other Nigerian, are mindful of the hard times and we also fill the pain. So we advise the Federal Government to send emissaries to verify the state of these roads and take palliative measures.

He warned that “failure by government to fulfill its promise by fixing the roads, we may not give any further notice of an industrial action”.