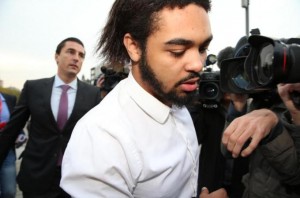 Prosecutors in Belgium have begun the biggest-ever terrorism trial in its history. Accusing 46 men of being members of a terrorist organisation that indoctrinated young men to fight in Syria.

Nine of the men being charged were present in court in Antwerp on Monday, including the alleged ringleader Fouad Belkacem. The others were allegedly still in Syria, with many possibly dead in the fighting there.

Prosecutors said the accused belonged to Sharia4Belgium, a group disbanded two years ago which prosectors say was led by the 32-year-old Belkacem.

Members, the court heard, approached young men and a few teenage women in Antwerp and Vilvoorde, north of Brussels, to invite them to their centre in Antwerp where they were indoctrinated and readied for their trip to Syria.

“The clear aim was to prepare them for armed combat,” Luc Festraets, a prosecutor, told the court.

Ann Fransen, another prosecutor, said evidence woud be presented in the trial of Belkacem telling his alleged followers that “jihad” was as important in Islam as praying and fasting.

“Belkacem’s words can only be interpreted as a call to violence and jihad,” said Fransen.

Once in Syria, the recruits joined organisations such as the Nusra Front, al-Qaeda’s affiliate in Syria, and groups which now aligned with or part of the ISIL group, prosecutors said.

Quoting from tapped telephone conversations and statements by one of the suspects, who will be a key prosecution witness, Fransen said the accused were deeply entwined with the groups inspired by fighting in Syria.

Sharia4Belgium was disbanded nearly two years ago. Prosecutors now want to prove it was a terrorist organisation.

Fransen said that leading a terrorism group has a maximum sentence of 20 years.