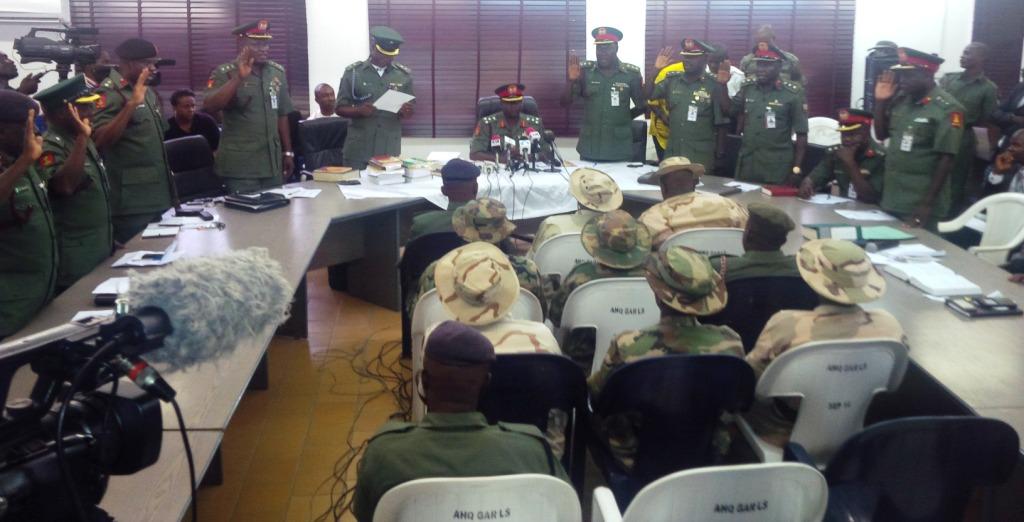 Fifty nine Nigerian soldiers on Wednesday in Abuja appeared in an Army General Court Martial on a two-count charge of criminal conspiracy to commit mutiny and mutiny.

All the accused soldiers pleaded not guilty to the charge.

The prosecutor, J.E. Nwosu, an army Captain, alleged that the accused had on August 4, in Maiduguri, refused to join the 111 Special Forces Battalion troops, commanded by Timothy Opurum, a Lieutenant Colonel for advance operation.

Mr. Nwosu said the operation was meant to recapture Delwa, Bulabulin and Damboa in Borno State from the Boko Haram terrorists.

According to him, the offence is punishable under Section 52(1) (a) of the Armed Forces Act Cap A20 Laws of the Federation of Nigeria, 2004.

The prosecution called the commander of the 111 Special Forces, Lt.-Col. Opurum, as one of the witnesses.

He also tendered the statement of the commander and was admitted by the court and marked as Exhibit P1.

Mr. Opurum, in his testimony, said the Special Forces were tasked with advancing to recapture Delwa to clear the way for other battalions to pass through to recapture Babulin and Damboa from the insurgents.

He said he took off for the operation with only four officers and 29 soldiers as “tasked” after majority of the 174 soldiers in the unit refused to join the operation.

The witness said after he took charge of the Special Forces, he addressed and assured them that they could achieve the task given to them.

He, however, said the soldiers were “hesitant to partake in the operation” in spite of the assurances.

Under cross examination by Femi Falana, who appeared for the accused, Mr. Opurum said 47 of the soldiers who initially refused, later rejoined the forces for another operation.

Mr. Opurum said the 47 came back after he called for reinforcement when they came under attack from the terrorists, who out-numbered them with superior weapons.

Asked if the soldiers refused to fight or refused to join the operation because of lack of superior weapons, he said all units in the North-East had requested for weapons.

On the disciplinary measure taken against the 47 soldiers, who initially refused, he said the process for that was to begin when they were court martialled.

At this juncture, Mr. Falana made an oral application to the court for the record of weapons recovered from the 47 soldiers, when they initially refused to join the operations.

The President of the Court, Brig.-Gen. Mohammed Yusuf, said the application had been noted “for action” and adjourned hearing till Thursday to enable the prosecution call another witness.

The General Court Martial was inaugurated on Oct. 2 to try 97 soldiers, including 15 senior officers for mutiny. (NAN)