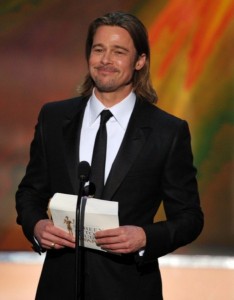 Superstar Hollywood actor and father — Brad Pitt has revealed his latest World War II movie, Fury has helped him become a better father because he has learned more about leadership and how to command respect.

The 50-year-old star has six children with wife Angelina Jolie, and he admitted the World War II movie has taught him how best to command respect.

He said: ‘I learnt a lot from this film. We all walked away absolutely enriched. ‘This role is a real study in leadership and learning to command respect and because of this, I am now a better father.’

The Hollywood hunk also insisted Angelina – who he married in August – is not the one in charge in their family home, despite being made an honorary dame earlier this month.

Speaking at the Fury premiere in London yesterday, Sunday, October 19, 2014, he is quoted by The Sun newspaper as saying: ‘No she’s not the boss. We have our own pecking order at home.’ But he admitted the ceremony at Buckingham Palace in which Britain’s Queen Elizabeth recognized the brunette beauty’s services to UK foreign policy and the campaign to end war zone sexual violence was a fantastic family affair.

He said: ‘It was a pleasure, and a great honour for Angie. It was a wonderful afternoon for our family.’