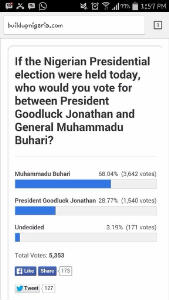 Nigerians have chosen former Head of State Muhammadu Buhari over Dr Goodluck Jonathan, to become their next leader.

In a result that may come as a shock to the supporters of President Goodluck Jonathan, Buhari has raked 69.98 percent of votes against the president’s 26.65 percent as at 18:36 Nigerian time.

Special Assistant to President Jonathan on new media, Reno Omokri had on Thursday put up a poll in which he sought to know who Nigerians would rather choose between Buhari and Jonathan, if they were both vying for presidency.

In the poll published on buildupnigeria.com, Omokri asked: “If the Nigerian Presidential election were held today, who would you vote for between President Goodluck Jonathan and General Muhammadu Buhari?”

Jonathan has not officially declared his intention to run for re-election, but all indications show that the Zoologist president is willing to stay at the Aso Rock for four more years. Buhari on the other hand has refused to be discouraged by past failures as he has picked up a nomination form of the All Progressives Congress (APC), as he seeks to become the party’s flag bearer for the 2015 presidential election. While nothing makes it certain that both of them will be contesting election in 2015, chances are high they will face at the polls. The current standing at the poll put up by the president’s aide.

Although numbers may change as time goes on, as the poll is still open, Nigerians might have seized the opportunity to give the president and the Peoples Democratic Party (PDP) a piece of their mind.

The presidency is expected to watch the poll closely and think up strategies to ensure the current state of the poll does not truly reflect what will happen at the 2015 presidential election.