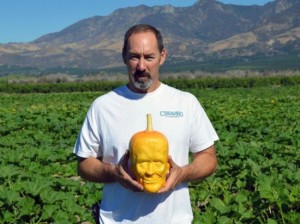 You can forget about carving jack-’o-lanterns this year, and take your Halloween decorations to a whole new level with Tony Dighera’s organic ‘pumpkinsteins’ – pumpkins that are grown to resemble the head of Victor Frankenstein’s grotesque monster. They’re admittedly expensive at $75 apiece, but these bad boys really do bring in the Halloween spirit!

The price is kind of justified considering the effort that Dighera put into creating these fabulous pumpkins. The California farmer used two special $100,000 tooling machines to make the pumpkin molds, which is quite huge in terms of investment. But he seems confident that his product is going to be a huge hit and that he will earn back the initial investment within the year.

Dighera designed the entire process from scratch. “There’s nobody to ask questions, you’re the pioneer,” he said. He had to start by making the perfect mold with just the right materials, to avoid the risk of the fruit rotting. The timing of the mold placement was also crucial – it had to be done when the fruit was small enough to fit inside. But there was also the risk of the fruit turning during the growing process and snapping away from its stem.

He does agree that $75 for a pumpkin is quite pricey. “I wouldn’t pay for it,” he admitted. “But there’s plenty of people with an income of 200k or more who will.” And it looks like Dighera’s right – the pumpkinsteins are so popular this season that they’re almost flying off the shelves. He’s now planning to develop heart-shaped watermelons for Valentine’s Day and white pumpkin skulls for Halloween next year.

Truth be told, mold-grown fruits and vegetables have been around for a while now. The Chinese have been growingBuddha shaped pears for years, and heart or cube shaped watermelons are really big in Japan, but Dighera is the first to use this technique for Halloween.