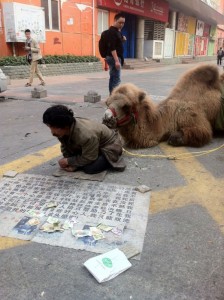 Beggars in China are stooping to new lows in order to gain sympathy (and money) from impressionable passers-by. Horrific pictures show deliberately mutilated camels that are being used to beg for donations. Apparently, the trick has worked wonders so far – the beggars’ collections have increased because people are quite sympathetic and end up donating generously to help the poor animals.

The latest case was discovered in Fuzhou city, China’s Fujian Province, where two men in ragged clothes were spotted kneeling down and begging, while holding the rains of a camel. When the police approached them, they found that the camel had no hooves, and the wounds indicated that they had been deliberately cut off.

In another incident, Fuzhou Evening News reported the case of a camel found by the roadside. It had been led through the streets by a beggar, and then abandoned. News reports suggest that beggars have been spotted with injured camels in several other cities such as Shenzhen, Wenzhou, Shaoxing, Xiamen, Guangzhou, and Hefei.

According to the police, mutilating animals is now the latest trend in begging. It seems that mutilating people no longer gets as much sympathy – limbless beggars are largely ignored. So these unscrupulous gangs have turned towards harming animals for monetary gain, since April this year.

Unfortunately, the police cannot take any action against them, because they aren’t breaking any laws. When questioned, the men simply claim that they rescued the camel after it had been run over by a train and since they had no money of their own, they had to resort to begging to care for the dismembered animal. There’s no way for the police to prove that the story isn’t true.

Understandably, Chinese animal rights activists are outraged by the whole situation and are warning people not to give these beggars any money. “You can see that the animal was obviously mutilated some time ago because the wounds are now healed,” said local animal rights campaigner Xiong Kung.

“My information is that they get a large amount of money every day from people shocked by what they see, and in effect they are rewarding these criminals for torturing the animals in the first place,” he added. “But when police turn up all they can do is maybe move them or fine them for begging, but nothing else. And that will remain the case until we get laws protecting animal rights.”

The wild camel is an endangered species and strictly protected by the Chinese government. There are only about 600 camels left in the Gobi Desert of northwest China, and only 800 in the deserts of Mongolia. In spite of this, there are no real laws that punish people who are cruel to these animals.

If it were not for for the police reports and statements from animal activists, I would have dismissed this story as fake. You see, the way camels sit when they rest makes them look like they have no legs. Even in the photos below, it’s hard to tell whether their legs have been amputated or just have their legs tucked away. The multiple reports however, and knowing the cruel nature of our race actually make this brutal practice plausible.