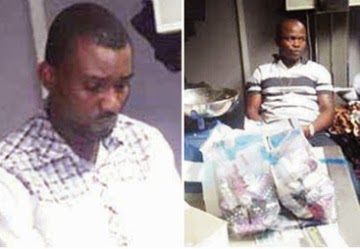 Operatives of the National Drug Law Enforcement Agency have recovered 13.33 kilogrammes of substances that tested for cocaine from two suspected smugglers.

The suspects – Marvin Daniel and Victor Akubuo – were said to have hidden the illegal substances inside capacitors and perfume bottles before eagle-eyed officials of NDLEA at the Nnamdi Azikwe International Airport, Abuja, intercepted them.

While Daniel concealed 7.58 kilogrammes of the drugs in the capacitors, his accomplice, Akubuo, concealed his, weighing 5.75kg, inside perfume bottles.

The illicit drugs, which was learnt has a street value of N119m, was intercepted during the screening of passengers en route from Dubai.

Twenty nine-year-old Daniel, who claimed to hail from Abia State, said it was in his bid to get-rich quick that he was lured into the act. He also expressed shock that the NDLEA officials were able to detect the neatly packaged drugs.

“I am searching for a business breakthrough when my friend told me that I could earn N500,000 by just going to Brazil. He told me they would buy my return ticket and all I needed to do was to bring in the cocaine. He assured me that the drugs would not be detected because of the way it was packed. Unfortunately, the drug was detected by NDLEA officers during a search at the Abuja Airport”, Daniel said.

In his confession, Akubuo, 26 and a trader in Anambra State, said he needed additional funds to revive his dwindling business, hence, his recourse to smuggling.

He said, “I needed some money to invest in my ailing business. That was how my friend convinced me to smuggle drugs for the sum of N500,000. The drug was hidden inside new perfume containers and I never knew it will be uncovered by the officers”.

Chairman of NDLEA, Mr. Ahmadu Giade, promised that the agency would continue to mount obstacles to the criminal activities of drug barons.

“These arrest and seizure are products of superior counter-narcotic strategies. The agency is committed to the eradication of drug trafficking cartels”, he said