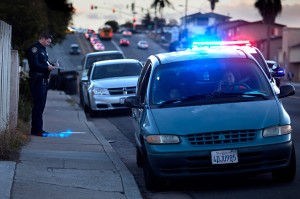 Police in northeast Ohio say a man trying to impersonate a police officer got caught when he tried to pull over a real officer.

Akron police say a man driving a Ford Crown Victoria with a spotlight and made to look like a police car tried to block the path of a real Akron officer on his way to work Monday night.

The Akron Beacon Journal reports that 50-year-old David Scofield had a rifle, shotgun, handguns, a bullet-proof vest, a silencer and ammunition in his car. Police say Scofield is a firearms dealer from Lancaster.

He was arrested on misdemeanor charges of impersonating a police officer, carrying concealed weapons and obstructing official business. He was in the Summit County Jail where records didn’t say if he had an attorney.