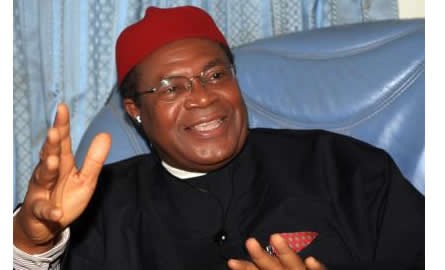 A former Chairman of the Peoples Democratic Party, Prince Vincent Ogbulafor, was on Thursday discharged and acquitted by a High Court of the Federal Capital Territory, Abuja, on charges of fraud, for which he was arraigned.

However, his co-accused, Emeka Ebila, who was Secretary of the National Economic Intelligence Committee (NEIC), was not so lucky as the court handed him a five years sentence for the same offence.

Ogbulafor and Ebila were arraigned in 2010 by the Independent Corrupt Practices and other related offences Commission (ICPC) over a 17-count criminal charge involving N170 million fraud.

Justice Ishaq Bello, in a judgment Thursday, held that the prosecution, represented by Adegboyega Awomolo (SAN), failed to prove its case against Ogbulafor.

He ordered that the five year sentence passed on Ebila be run concurrently.

The judge held that from the evidence presented by the prosecution, there was no connection between Ogbulafor and the alleged crimes.

He further held that Ebila’s confessional statement, tendered before the court, without any objection from his lawyer, Awa Kalu (SAN), was a corroboration of the allegations filed against him by the prosecution.