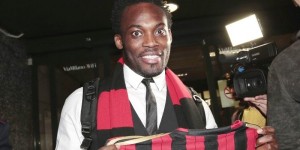 I don’t know if you’ve heard this ridiculous rumor, if you haven’t, here it is.

Reports have been circulating that Ghana football star and AC Milan striker, Michael Essien, has contracted the Ebola Virus Disease.

However, there have been no confirmation of the story yet, either from Esseien’s handlers or his club, meaning it is nothing more than mere speculation.

A check on the website of the player’s club, AC Milan has no such report about the player or the said disease.

The AC Milan midfielder, who joined the Italian giants in January this year, previously played for Chelsea FC in the English Premiership before joining AC Milan and has had a successful career with clubs including Bastia, Olympic Lyon and a loan spell at Real Madrid under his belt.