Two American priests have suddenly became extra-popular after they were filmed dancing during a fundraiser at the Pontifical North American College near the Vatican, Rome.

Scroll down for video! 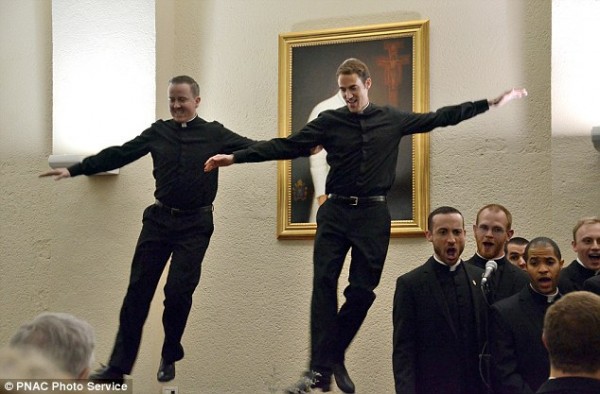 The Rev David Rider, 29, and the Rev John Gibson, 28, have become an internet sensation. Two young priests were first filmed in April, impressing an audience with their lively tap-dancing duel.

The clip of dancing American priests who are studying in Rome has unexpectedly gone viral. It has already being viewed more then 400,000 times on YouTube and it keep gathering hundreds of thousands of views.

The priests’ popularity was tinged with criticism. Some commentators wrote that the priests should not have been dancing under a crucifix and a painting of Pope Francis, calling it “disrespectful”.“We would just refer them to the Bible. The Lord tells us to live with joy,” the Rev Rider says.

Watch the video or read its transcript below:

At the start of the video a room of diners are seen listening to choir when suddenly a priest takes to the stage and stuns the room with an accomplished tap routine. Not to be outdone, a second seminarian takes to the stage and attempts to outdo his rival with an energetic Irish dance. A tap battle ensues, culminating in an immaculately choreographed duet which earns the pair a standing ovation.