Delta state government burnt more than 200 motorcycles confiscated from those who ignored the state’s newly presented ban on motorcycle riding in some parts of the state.

The disputed destroying of the motorcycles was carried out at the Mosogar end of the Gammon Bridge. 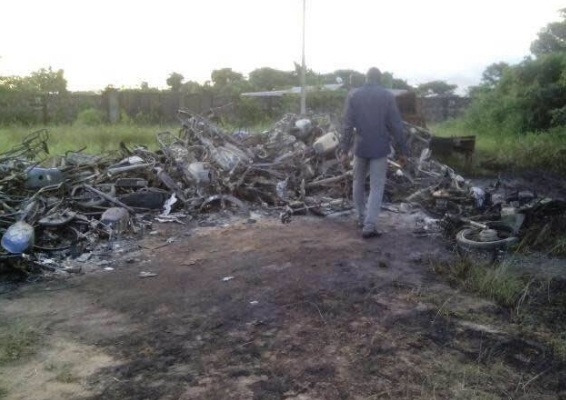 The State Commissioner for Transport Mr. Ben Igbakpa has been highly-criticized for this act. Some have described this as ‘wickedness and jungle justice’.

Ben Igbakpa, in turn, said he didn’t know about the State burning the motorcycles.

“I am not aware of the burning of any Okada, the fact remains that any confiscated Okada is not going back to the owner. How such Okadas are being disposed is not the issue, what matter is that, all Okadas in these areas must be off the road,” he told.

Commissioner added that a monitoring workout, which began on October,1, and which caused the confiscation of the burnt motorcycles, became needed in demand to inform the motorcycles operators of the seriousness of the state’s directive of the ban.

At last, Igbakpa encouraged the banned Okada operators to assume the use of commercial tricycles popularly referred to as ‘Keke Napep’ at a reduced degree from the state transport secretariat of Asaba, if they must stay in business.

The State government forbade commercial motorcycles Okada two weeks ago in some parts of the state, including Ika South, Ika North and Sapele.