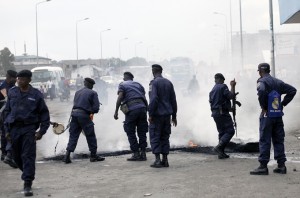 Democratic Republic of Congo has ordered the expulsion of the United Nations’ top human rights official in the country, a day after the global body released a report accusing Congolese police of executions during a crackdown on gangs.

A spokesman from the interior ministry said the order to expel Scott Campbell, director of the United Nations Joint Human Rights Office (UNJHRO) in Congo, would take effect on Friday.

“The present report, under examination, was led in a partial and partisan manner, with the manifest intention of discrediting the PNC (Congolese National Police), of demoralising its agents and destabilising the institutions of the Republic,” Congolese interior minister Richard Muyej said on Thursday, calling Campbell a “persona non grata”.

The report, released on Wednesday by UNJHRO, said the Congolese National Police summarily executed at least nine men in the capital Kinshasa between November 2013 and February 2014.

Muyej, whom the report said ordered the crackdown called Operation Likofi, on Thursday dismissed its findings and said he had already addressed concerns about the operation several times, including before parliament in December 2013 and in a statement in April to the media and diplomatic corps.

Muyej said that the list of cases purportedly confirmed by the UN was “only a litany of presumptions presented in the conditional and resting on manifestly discredited claims”.

He denied details in the report – among them that officers participating in the operation were masked and operated from jeeps – and added that the government planned a third phase of the anti-gang crackdown.

Campbell, who was not the main author of the report but is responsible for monitoring human rights in the country, declined to comment on his expulsion.

“We think this is a very important report, and we believe the government should take it seriously,” he said.

The UN report said that during the crackdown police were also responsible for the disappearance of at least 32 others.

According to the report, sources told investigators that the victims, men aged between 16 and 44, were usually shot, strangled or hanged at a police station in Kinshasa’s Limete neighbourhood.

The Congolese National Police established a commission of inquiry on August 15 to investigate potential abuses committed during the operation.

But according to the UN report, only one officer has been convicted on charges related to the crackdown.

“In the majority of cases, no steps seem to have been taken by the competent authorities to find and prosecute all the perpetrators of these violations,” the report said.

The United Nations plays a key role in ensuring Congolese security, and has a 21,000-strong peacekeeping mission known as MONUSCO in the central African country.