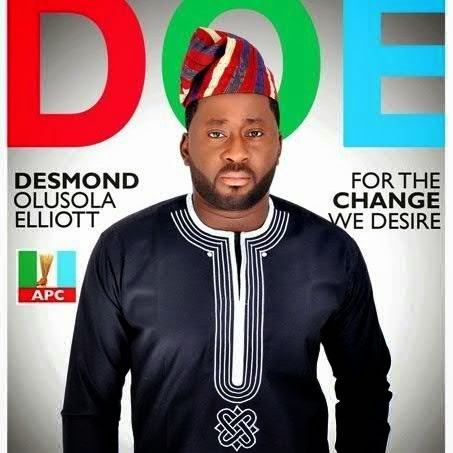 Not only did Nollywood actor, Desmond Elliott’s decision to join politics come as as surprise to many but also the fact that he was representing Lagos as a Yoruba man. Apart from the fact that many people did not know Desmond was a Lagosian, they also didn’t know his name was Olusola. Desmond Elliott declared his political intentions and lo and behold , Olusola was written amongst his names on his poster.This has not gone down with many fans who feel that he totally withdrew himself from his Lagos origin, never acted a yoruba movie until much recently and now wants to represent the state.

Defending his actions,the actor told City People:“I am from Lagos state. My father is from Olowogbowo in Lagos Island but my mother is from Delta state. I refer to myself as being a Pan-African. People don’t believe I am a Lagosian because I seldom act in Yoruba movies. And I didn’t include the Shola in my name. Then because my surname is also English, many couldn’t differentiate which made people confused of where exactly I am from. I am very detribalised. People of my constituency know my story and know where I come from. I have always used Shola in my primary school days. I went to Air Force Primary School in Plateau and later attended St John’s College, both in Jos. I proceeded to Lagos State University where I studied Economics and graduated in 2003