Ebola: Africa Bank Head Concerned Previous Donations Could Be ‘Repackaged’ and Taken Away From Other Areas Of Need 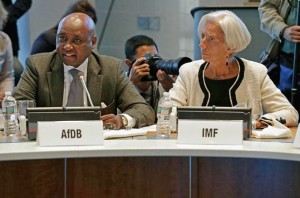 The head of the African Development Bank expressed concern that some donors responding to the Ebola crisis were repackaging aid money, channeling it away from other areas of need in the three countries at the center of the epidemic.

In an interview on Saturday, Donald Kaberuka said moving funds from already allocated development projects in Liberia, Guinea, and Sierra Leone was unhelpful in the long term and would make it more difficult for the countries to recover.

“I have told donors that I hope what they are announcing is additional resources because if it isn’t … once (Ebola) is gone we will have no resources to build healthcare systems and continue reconstruction,” Kaberuka told Reuters news agency on the sidelines of meetings of the International Monetary Fund and World Bank, in Washington.

“We need to put new money on the table,” he said, adding that he feared that once the crisis eased countries would be left without funding for development projects earmarked before Ebola arrived.

Ebola has killed more than 4,000 people since March in an epidemic spreading through three impoverished countries.

The international response to the Ebola crisis has brought together donors pledging hundreds of millions of dollars in aid.

Kaberuka has criticised the international response to the Ebola outbreak as too little, too late.

“It was treated as a small, local public health problem in a remote part of Africa with no global significance,” said Kaberuka, a former finance minister from Rwanda.

It should be treated just as SARS or mad cow disease were and not as a disease of Africans, he said.

Kaberuka said it was vital that the aid money go through budgets of the governments of the three countries to help them better coordinate the response. The bulk of foreign aid was going towards supporting aid agencies, international care and food supplies, he added.

“We need to make sure that the governments of Sierra Leone, Liberia, and Guinea have money in their budgets to pay health workers, to ensure they have the ability to coordinate all of this,” he said.

“In a situation like this there are so many little things happening but somebody has to tie it together and that can only be a government.”

The African bank itself has pledged $210m to the three countries and is open to putting more on the table if needed, said Kaberuka.