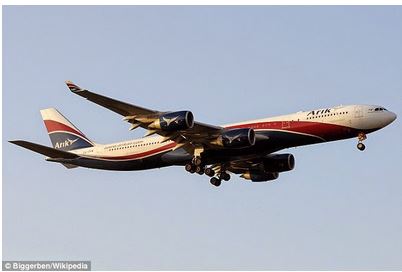 There was fresh Ebola fears yesterday October 16th after an unidentified 63 year old man on board an Arik flight which left Lagos on Wednesday night heading to New York’s JFK airport died before the plane reached its destination after vomiting profusely in his seat.The plane crew immediately contacted the Centre for Disease Control, CDC, and custom officials, who then boarded the plane as it touched down, forcing 145 worried passengers to remain on board, UK Daily Mail reports..CDC then conducted tests on the body and found he did not have Ebola.

According to The New York Post the unidentified man’s body was then handed over to the Port Authority who removed it from the plane. What they plan to do with the remains have not been made known.
Throughout the ordeal, the door connecting the aircraft to the terminal was left open, prompting worries from Republican Congressman Peter King that there are not enough checks in place before reaching the screening process.

In a letter to the Department of Homeland Security, King wrote:

‘It was what I was told a cursory examination. The Port Authority cops and personnel from Customs and Border Protection were there, and they were told there was no danger because the person did not have Ebola,’

‘But their concern was, how could you tell so quickly? And what adds to the concern is how wrong the CDC has been over the past few weeks.

‘These individuals transit the airport with the rest of the traveling population, including using the restrooms,’ King wrote in a letter on Thursday.