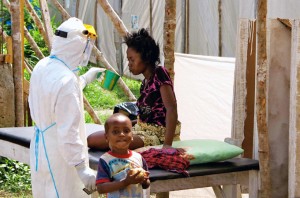 With the alarming rate of spread of the Ebola virus in Sierra Leone, it might take a very long time to totally eradicate the virus from the country.

An estimate of 5 people are being infected with Ebola every hour in Sierra Leone and the rate is expected to double by the end of October, the Save the Children charity has warned.

Justin Forsyth, the chief executive of Save the Children charity, said on Thursday that “the scale of the Ebola epidemic is devastating and growing every day”.

The charity issued the appeal as Britain hosted a conference in London to gather support for the fight against Ebola in Sierra Leone, its former colony.

Britain has provided 143 new treatment beds so far and promised almost 600 more in the coming months, but Save the Children said other countries must join the fight.

There were an estimated 765 new cases last week, the charity said, but only 327 beds across the country.

The number of cases was likely to be “massively” under-reported, as “untold numbers of children are dying anonymously at home or in the streets”, it said.

“We are facing the frightening prospect of an epidemic which is spreading like wildfire across Sierra Leone, with the number of new cases doubling every three weeks,” said Rob MacGillivray, the charity’s country director in Sierra Leone .

“It’s very difficult at this stage to even give accurate figures on the number of children who are dying from Ebola, as monitoring systems cannot keep pace with the outbreak.”