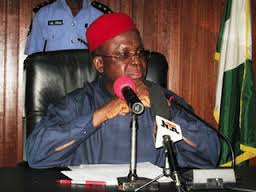 Governor Martin Elechi of Ebonyi State on Tuesday maintained that the people of the state want the Minister of Health, Prof. Onyebuchi Chukwu, to become the next governor of the state because he has the capacity to succeed on the job.

Speaking with State House correspondents in Abuja shortly after a meeting with President Goodluck Jonathan, Elechi explained that though the minister had not indicated his interest in vying for the governorship seat of the state, the people of Ebonyi are clamoring for him to come and take up the position in 2015.

He said: “First let me put the facts straight, the Minister of Health has no ambition to become governor or hold any other political office but we the people of Ebonyi State have assessed him and we think he is a good material to do the job. So we are appealing to him, he is not canvassing, but we want to conscript him to answer the call of his people.”

“I have known him for many years as Chief Medical Director in our teaching hospital back home. He is a serious minded person and as minister of health the nation can testify to his capability. He is focused and determined to do things right and I think we need people like that. People who do things right”.

Elechi continued: “We have not endorsed him, we are saying he should show interest, it is still the state congress that will choose whoever they want. It is not against the dictates of the NWC.

“There is no conscription in our own case. When you appeal to somebody to show interest, you know many people are shy and they don’t want to come out but the people who are to be served, are the people who determine their own destiny. It is up to them to choose whom they like, it is not an imposition of any kind.”

“People are saying we know you are good, come and continue your good works at this level and I think that makes the job easier for the party”.