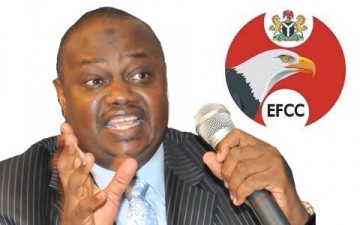 The Speaker, Edo State House of Assembly, Uyi Igbe; Majority Leader, Philip Shaibu; and the Chief Whip, Folly Ogedengbe, who were held by the Economic and Financial Crimes Commission, EFCC, have been released.

The three principal Assembly officers, who were invited by the EFCC to appear before it on Wednesday, were held by the anti-graft agency, whose officials grilled them over some financial transactions of the House.

But Chairman of the House Committee on Youths, Sports and Information, Adjoto Kabiru, on Thursday, raised the alarm over the alleged detention of the three lawmakers by the EFCC for purportedly forging the signature of one of their colleagues.

Speaking at the Benin Airport upon their return to Edo State, the speaker expressed dissatisfaction with the agency, which he accused of busying itself with affairs of the Assembly rather than focus its attention on investigating financial crimes.

He, however, assured the people that the House would not be cowed as it would continue to remain focused on its constitutional duties.

Igbe said, “I was under the impression that they were to investigate financial misappropriations, only for us to get there and issues that concerned the House of Assembly was what they (EFCC officials) were bringing up.

“What they were telling us was that somebody alleged that we forged the signature among the signatures that we used to impeach the former Deputy Speaker, Festus Ebea.

“I was taken completely aback. Then again, I’m not too surprised because we all know that this is the systematic way they have been using to harass and intimidate us since.

“But I want them to know that this is only going to make us stronger. We will remain focused. We will not shake. We refuse to be intimidated”.

Meanwhile, the Edo State Police Command has announced the arraignment of 22 suspects before an Oredo Magistrate Court in Benin in connection with last Saturday’s attack at the Edo State House of Assembly Legislators’ Quarters.