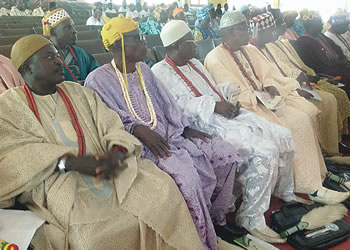 The Ekiti State Council of Traditional Rulers has warned against any attempt to subvert the mandate freely given by the people to the Governor-elect, Mr. Ayodele Fayose, in the June 21 governorship election.

The traditional rulers, who made their position known after a meeting held in Ado-Ekiti on Tuesday, warned that such attempts could further aggravate the already tensed situation in the state.

The meeting, which reviewed the security situation in the state, also commiserated with the family of a former state chairman, National Union of Road Transport Workers, Mr. Omolafe Aderiye, who was assassinated by unknown gunmen last Thursday.

In a statement signed by its Chairman and the Onitaji of Itaji, Oba Adamo Babalola, and made available to journalists in Ado Ekiti, the council maintained that the people of the state had spoken through the ballot papers in the election.

The Council said, “We condemn in its strongest terms the occurrences which led to destruction of life and property. We believe that Ekiti State is greater than any individual or group of persons. We should steer clear of any act that can set Ekiti ablaze.

“We appeal to the gladiators to sheathe their swords and prevent further aggravation of the already bad situation.

“We are of the view that the people of the state had spoken through the ballot on 21st June, 2014 and a mandate freely given. Ekiti State Council of Traditional Rulers therefore feels strongly that this mandate should be actualized as any attempt to truncate it may further aggravate the situation”.

The council expressed implicit confidence in the ability of Ekiti judiciary to dispense justice on any matter judicially and impartially, urging that the body must continue to prove that it remained the hope of the common man.

The traditional rulers also commended the security agencies for efforts to restore peace in the state in the wake of Aderiye’s murder.

They also appealed to the people to shun violence to ensure speedy restoration of peace and to complement the efforts of the security agencies.