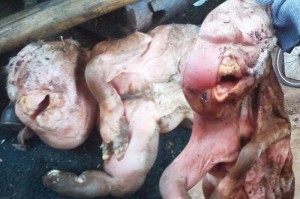 People in Argentina, became angry at a farmer and his family when they learned that a goat was born with a human head.

However, the farmer said that she buried the goat because the family feared it would bring them bad luck. Olga Villalba said that the goat was already dead when it was born, and she blamed pesticides for it being born with a human head.

Angry locals fear that the reason for the human head was something else entirely, and began to spread rumors that someone connected to the family had been having s*x with the goats, producing mutated offspring.Villalba vehemently denied the allegations, saying that neither her family or friends had interfered with the goat in any way.

“It was clearly a genetic mutation caused by the overuse of pesticides. Another neighbor who was here and was curious, took a picture and unfortunately, posted it online, sparking these ridiculous allegations,” Villalba said.