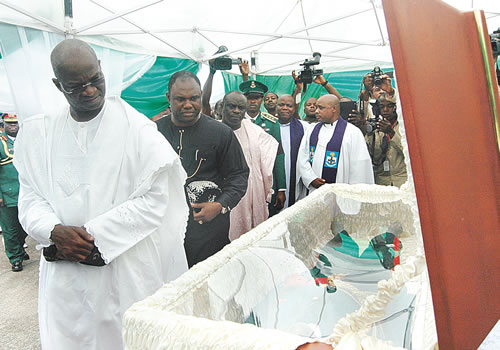 Gov. Babatunde Fashola of Lagos State was among the people who paid their last respect to the late Brig-Gen. Benjamin Adekunle before he was laid to rest on Friday.

The News Agency of Nigeria (NAN) reports that others who went to pay their last respects were the Chief of Army Staff, Lt-Gen. Kenneth Minnimah and the Chief of Air Staff, Air Mashal Adesola Amosu.

The funeral service, held at the Tafawa Balewa Square in Lagos Island, saw many senior and retired officers trooped to the occasion to pay their last respects before the remains were buried at the Ikoyi Vaults and Gardens.

The oldest son of the deceased, Mr Adelaja Adekunle, told journalists that the ability to speak
three major Nigerian languages helped his father during the war.

“My father speaks the three major Nigerian languages: Igbo, Yoruba and Hausa. It helped him a lot during the war.

“My father was a man with great feelings for all.

“He hardly spoke to us about his escapades during the war, and having been born after the war, the things we heard about him were what his colleagues said.

“They all have enormous respect for him.

“What we heard was that he ensured that all soldiers under his command got adequate protection and that he believed in one Nigeria.

“My father was given a task, as regard his military calling, to restore peace in his area of responsibility and to ensure that the country remained one”, he said..

Adekunle also said that the father was one of the most humorous persons to be with at any time.

“He was honest and did not hide his feelings on any issue; he treated all his children equally”, he said. (NAN)