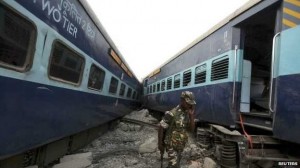 Indian railway officials confirm that at least 12 people have died after two passenger trains collided head on in the northern part of the country.

The collision took place near Gorakhpur station, about 270km (167 miles) from the state capital, Lucknow.

Some reports said the Krishak Express, travelling from Varanasi to Gorakhpur, overshot the signal and rammed into the Barauni Express from behind.

At least 45 people were injured in the accident. Officials said: – “In the first instance, it appears that the accident took place because of an error on the part of the driver and assistant driver of the Krishak Express. They have both been suspended with immediate effect,”

The injured have been admitted to hospital and rescue operations are under way, he added.

There have been numerous train accidents in recent years, killing hundreds of people.

In May, 23 people died after a passenger train derailed and hit a stationary goods train also in Uttar Pradesh, officials said.

In December, 26 people died in a fire which engulfed a carriage of the Nanded-Bangalore Express while it was travelling through southern Andhra Pradesh state.

In August last year, 28 people were killed after being hit by an express train while crossing the tracks in the state of Bihar.