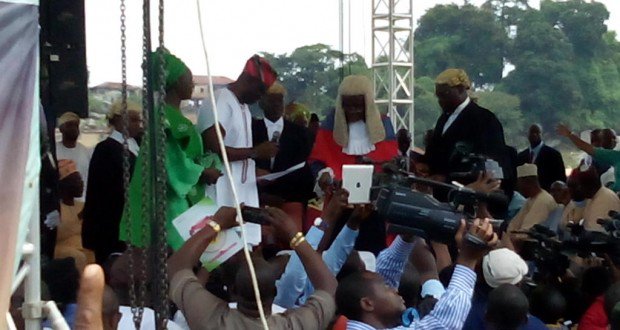 The newly-inaugurated governor of Ekiti state, Ayo Fayose, has affirmed that in continuation of his welfare policy to the people of the state, he will appoint a Special Adviser on “stomach infrastructure”.

In apparent response to claims by the All Progressives Congress that Mr. Fayose won the June 21 governorship election in the state as a result of his ability to deploy “stomach infrastructure” such as rice and other essential commodities, assured them that the largesse would continue as long as he is governor.

“I am already grooming your Christmas Chicken and your bags of rice are coming”, he said to a loud uproar of approval from the mammoth crowd that witnessed his historic inauguration

He also said being a governor will not affect the way he has been relating with the common people.

“I am the governor of your imagination, the governor that eats amala with you, drinks agbo jedi and eats boli with you”, he said.