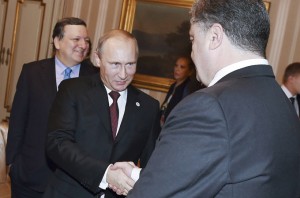 Ukraine President Petro Poroshenko has confirmed that an agreement has been reached with Russia on a provisional price for gas deliveries during the coming winter months.

Poroshenko on Saturday said the deal was agreed at talks with his Russian counterpart Vladimir Putin in Milan on Friday, and he hoped it would finally end the gas dispute between the two countries.

He added that he hoped the solution would be finalized before October 21, ahead of scheduled talks in Brussels.

“On the basis of consultations, I can say that Ukraine will have the gas, will have heating,” Poroshenko said in an interview broadcast on Ukrainian television late on Saturday.

Progress towards settling the gas row has raised hopes of an EU-backed resolution of the broader conflict embroiling Moscow and Kiev over the border dispute that is wracking eastern Ukraine.

Gazprom cut deliveries to Ukraine in June after Kiev disputed a price increase set by Moscow.

But Poroshenko said that a price had now been agreed by both sides and that Russia had “accepted” the Ukrainian position.

Poroshenko met Putin three times in the space of 10 hours in Milan on Friday, twice in the company of various European Union leaders then, finally, in their first private meeting since late August.

Following the meeting, Poroshenko said he hoped a deal could be done at or before already scheduled talks in Brussels on Tuesday.

“Before October 21, we hope to find a solution for the energy question,” he said.

Putin also implied a deal was close and said there had been “progress” and “agreement on the conditions for the resumption of deliveries of gas, at least in winter period”.

The Russian leader urged EU governments to help finalize the complex funding package required for it to happen, saying the EU “could and should” help Ukraine with the payment.

EU-brokered talks with Ukraine and Russia have produced a draft accord under which cash-strapped Kiev would pay $3.1 bn in unpaid bills to Moscow by the end of October, with a new contract to cover subsequent deliveries.

Previously the supply had been paid in installments after the gas was supplied, but Gazprom and Russia have recently insisted on pre-payment, something Ukraine will not be able to manage on its own.

Russia accounts for around one-third of the EU’s consumption, half of which transits via Ukraine, and previous disruptions, in 2006 and 2009, led to sharp spikes in prices.