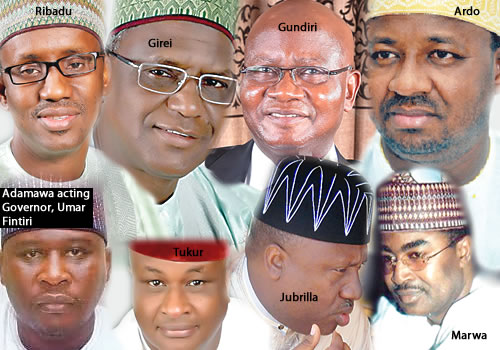 Eight Peoples Democratic Party aspirants that obtained nomination forms for the botched October 11 governorship by-election in Adamawa State, yesterday, stormed the Abuja secretariat of the party, asking the leadership to respect a subsisting agreement on zoning.

Upon stepping down for Fintiri in the botched by-election, the national leadership of PDP had assured the aspirants that their nomination forms would still be valid for the 2015 governorship election proper in the state.

Speaking on behalf of the aspirants, Ahmed Gulak, a former Special Adviser to President Goodluck Jonathan on Political Matters, said: “We are all aspirants from Adamawa State that were supposed to take part in the by-election that could not hold.

“The party, alongside the government at that time, entered into an agreement that our forms will be validated for the 2015 election and the governorship slot will be zoned to Adamawa central.

“We are not aware that the governor has picked form but the fact is that there is a subsisting agreement among all parties, including the party that the slot for governorship in Adamawa 2015 will be for the central.