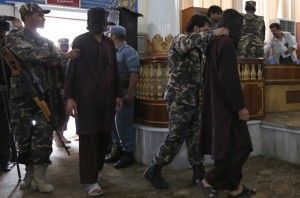 In what feels like a just punishment for their act, five Afghan men have been hanged for the gang rape of four women despite the United Nations and human rights groups criticizing the trial and calling for new president Ashraf Ghani to stay the executions.

“Five men in connection to the Paghman incident and one other big criminal were executed this afternoon,” Rahmatullah Nazari, the deputy attorney general, told the AFP news agency on Wednesday.

The rapes took place in Paghman, outside Kabul, in August.

There was no immediate comment from the office of the president, who faced strong public pressure to not stay the executions after he came to power last week.

“The court’s verdict has been implemented and all the convicts have been executed – five from the Paghman case, plus Habib Istalifi, who was head of a notorious kidnapping gang,” the attorney general’s chief of staff Atta Mohammad Noori told AFP.

The men were executed in Pul-e-Charkhi prison near Kabul.

In August the armed gang members, wearing police uniforms, stopped a convoy of cars returning to Kabul at night from a wedding in Paghman, a scenic spot popular with day-trippers.

The attackers tied up men in the group before raping at least four of the women and stealing valuables from their victims.

The brutal attack provoked a national outcry with many Afghans demanding the men be hanged. Then-president Hamid Karzai signed their death sentences shortly before leaving office.

But the court process raised major concerns, with the trial lasting only a few hours, allegations of the suspects confessing under torture, and Karzai calling for the men to be hanged even before the case was heard.

“Today’s executions cast a dark shadow over the new Afghan government’s will to uphold basic human rights,” Mellbin said on Twitter soon after the news broke.